where is math in our classroom?

In September, I kind of got a little ahead of myself when working in Louesa Byrne’s K/1 classroom at Thompson. Louesa has been investigating the use of Story Workshop with her young students and I said, hey, why don’t we try a Math Story Workshop! We used Book Creator and the students created little scenes and then used the audio tools to record their voices telling their math stories.

A question emerged from a little five year old…What is math? Wow. Big question! This was the “getting ahead of myself” part and I realized it right away. It was September in a classroom with many students who had no formal school experience. Part of me thought it was great they really didn’t know what math was…should we be compartmentalizing everything anyways? Couldn’t we just look at everything as learning?

So last week we backtracked a bit and did a class brainstorm about makes up mathematics. Many students were able to contribute ideas to the class chart and I could tell some students were still unsure. 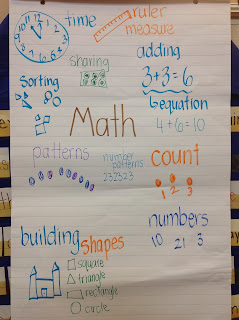 Louesa set the students up in partners with an iPad to share. Two days before I came in, Louesa had introduced the Haiku Deck app to the class and they learned how to start a new slide show, search for an image and add text. I popped into the class at the end of the day and tweeted out that the students were working with Haiku Deck. Within seconds, the good folks at Haiku Deck tweeted back! So fun for the students to see there are lots of people interested in what they are doing!

The students worked together and took two photographs each, using the iPad. They walked around their classroom looking for math and I followed along with my iPad, amazed at the different things they found and created. The students added their text and then we had a little sharing circle so we could see everyone’s Haiku Decks. 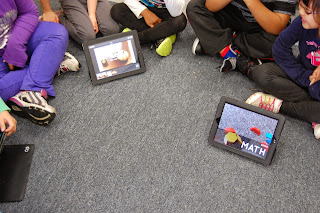 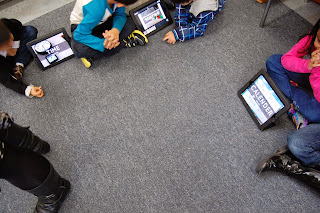 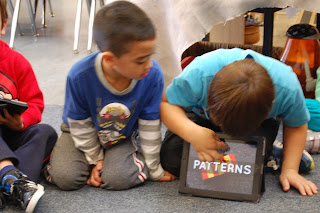 And here is the collaborative one that I created with the students on my iPad: