looking at our world through a mathematical lens

On Tuesday at Grauer, I worked with Ms Poon and her class of grades 4 and 5 students. We began our session together with a short discussion about what math is…all the different areas of mathematics. We then explained that we were going to go outside of the school with the iPads and use the camera to see what mathematics we might notice. The students were a bit hesitant at first but soon began to see math in all sorts of places. The students worked in partners for this task. 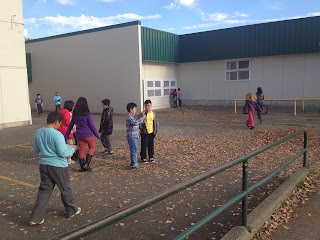 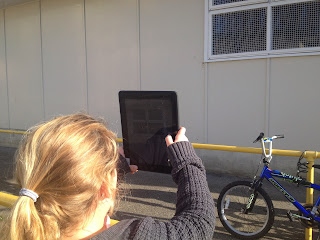 When we got back to the classroom the students went through their photos and chose one that inspired them mathematically. We discussed what the photograph made them wonder about (and many of these questions had emerged when we were outside) and what kind of mathematical problem they could ask based on the photograph. During our discussion of problems we discussed how a problem really isn’t a problem if you know how to solve it right away which helped students move on from the more standard word problem format (ie. There were 43 leaves on the ground and 26 blew away. How many leaves were left?).
As students posed their problems, they began to think about how they might solve them. Some students used the screencasting app ShowMe to share their photograph, state their problem and explain how they might start to figure it out.
The students emailed their photos and problems to me and during our next session together we are going to compile the photos and problems into a photo book, possibly using Book Creator on the iPads.
~Janice