Based on the questions many of the students asked yesterday, we began with a reading of short introduction to littlebits, taken from the booklet in the deluxe kit. It helped students understand the different “jobs” of the components (power, input, output and wires/linking) and the importance of the order the bits are sequenced in. Although they read this information, the students really needed to just tinker away and play around with the bits to see the effects of putting them in different orders.

We then provided the students with a set of circuit maps and asked them to create the circuits as shown and then test them with the power bit and battery. This gave students practice in following directions and having success with a series of bits. Having only two kits means only two power/battery combinations and the students have been great about sharing the components. 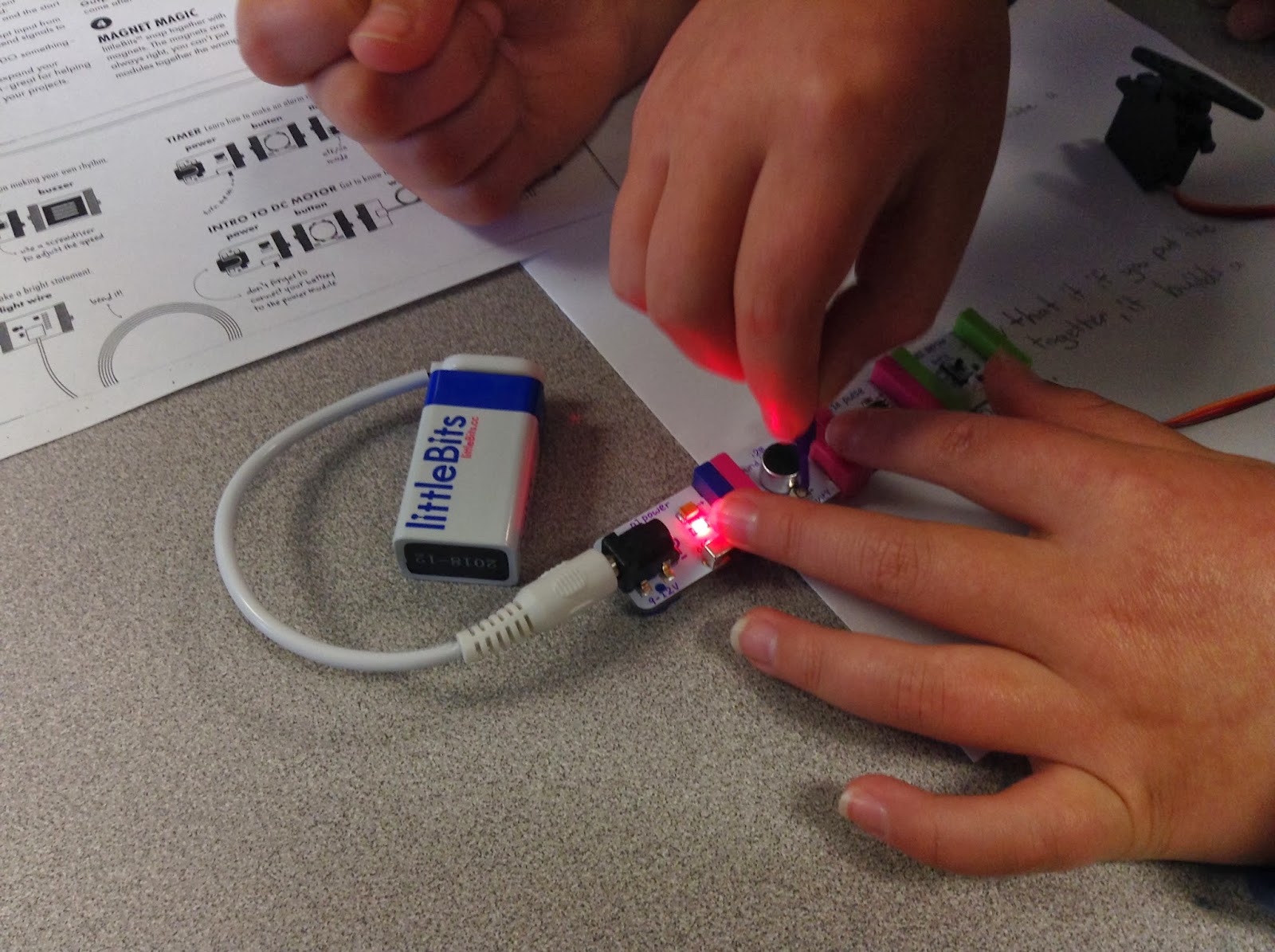 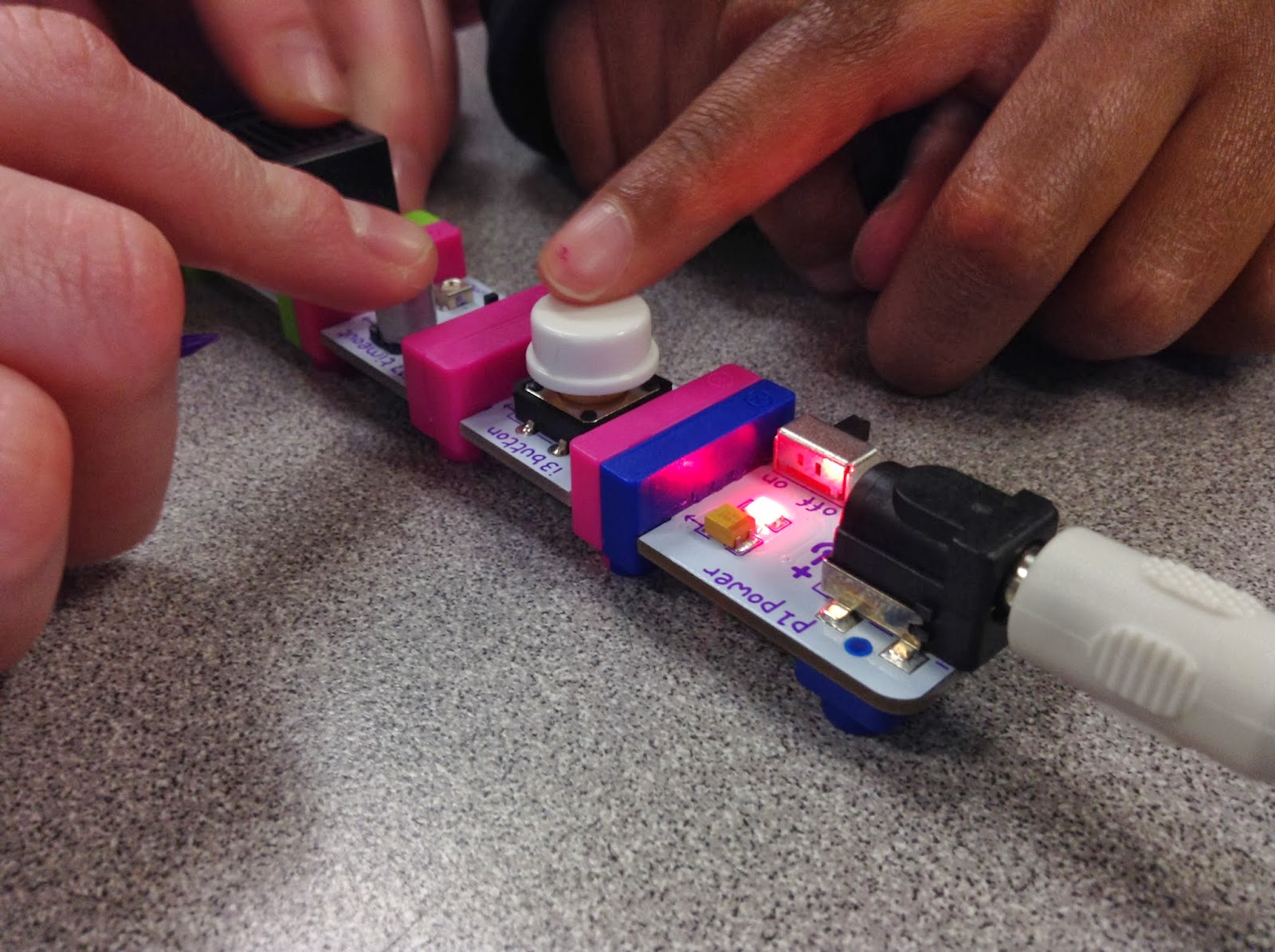 We then watched an overview video of the components of the deluxe kit so that the students had some understanding of the possibilities for the different components. The students were then asked to create one of two structured projects from the kit guide  – either the tickle machine or the wave greeter. This projects provided the students with practice adding new found materials to their projects, such as a feather or a cut out object that they could make move. 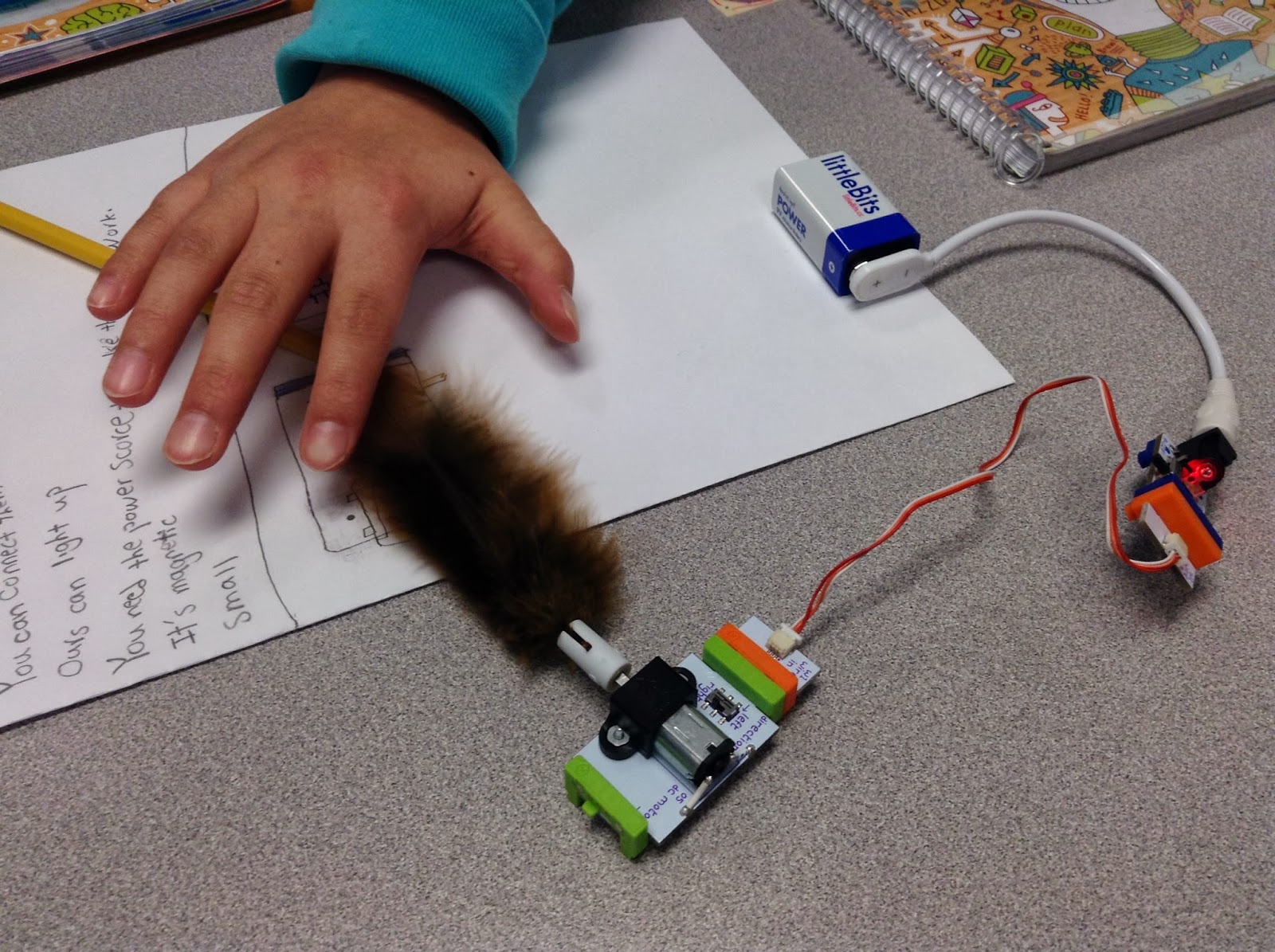 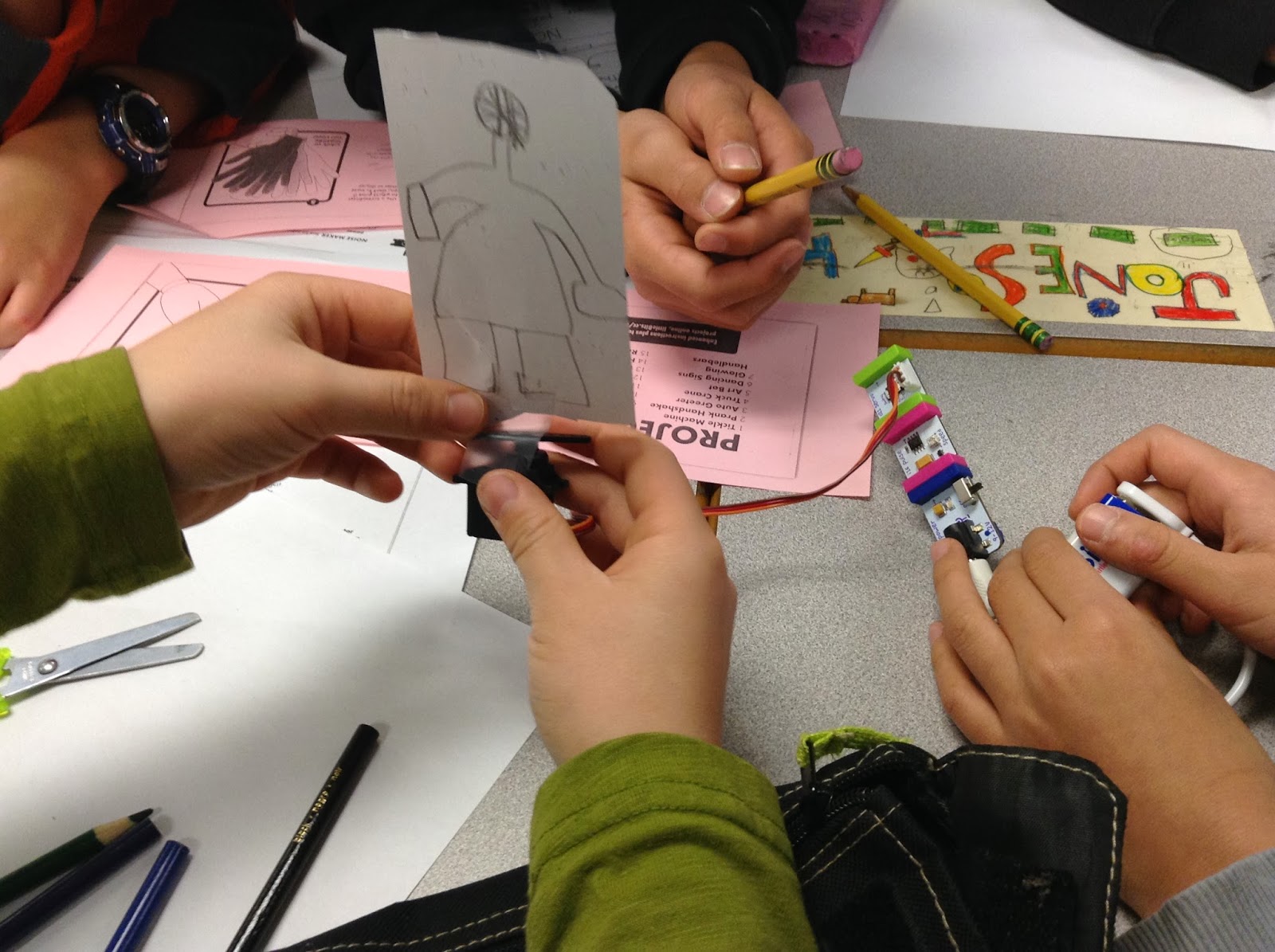 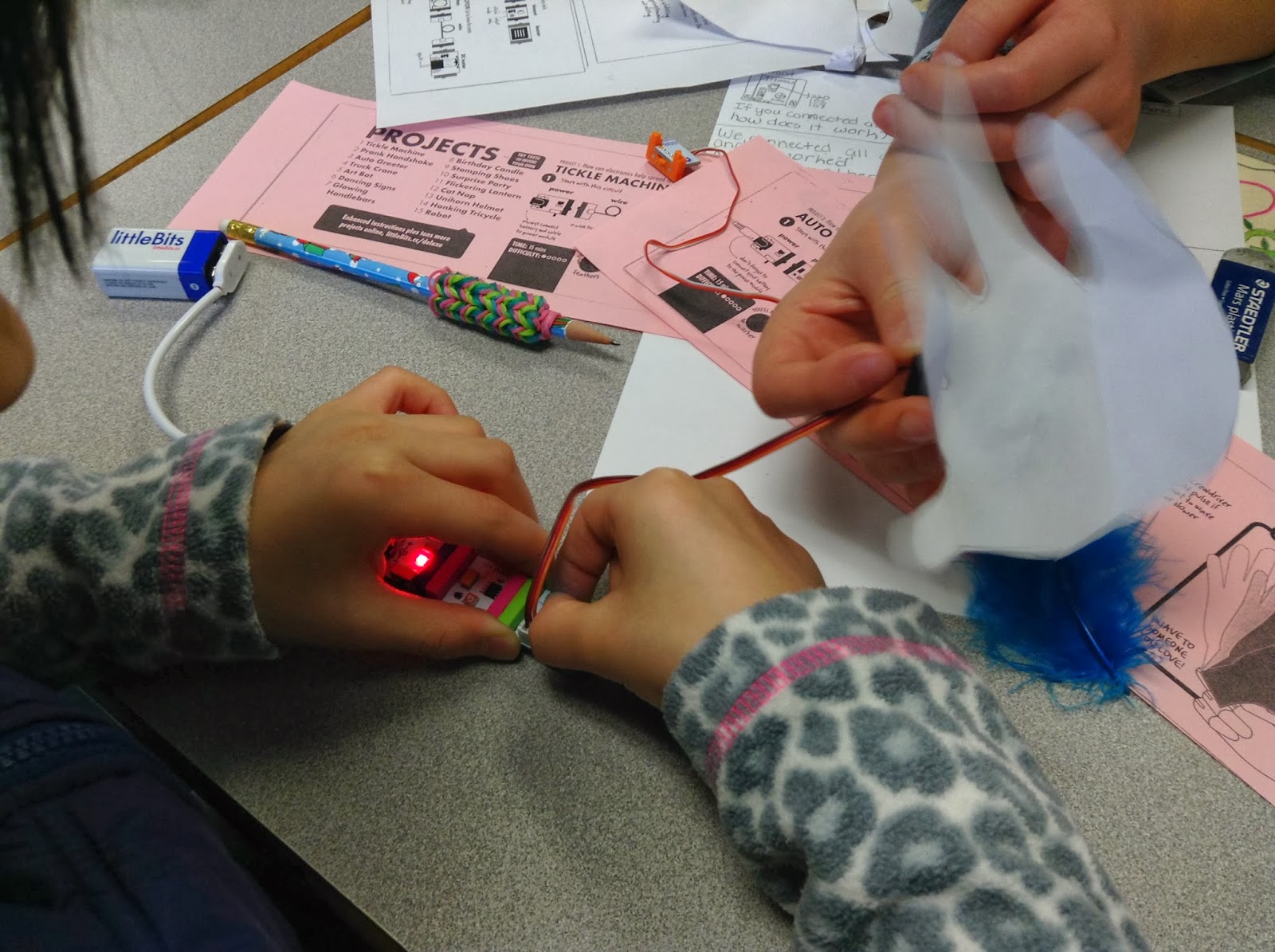 Again, students recorded their observations, questions and findings. They also began to think about their own projects and what they might like to create with littlebits.

The following is a short animoto video of today’s investigations:

This week I am spending my afternoons at Diefenbaker Elementary in Rick Hikida’s grades 4 and 5 classroom. We are piloting a set of littlebits electronic components with his students. I explained that this would be a STEAM-based project (Science, Technology, Engineering, Art & Mathematics) project and the students were on board before they even handled the littlebits.

We handed out plates of components to small groups of students and asked them to investigate the pieces and record what they noticed along with their questions. Rick noticed that some students began drawing and labelling the pieces on paper while others couldn’t help but start manipulating and tinkering with the bits. 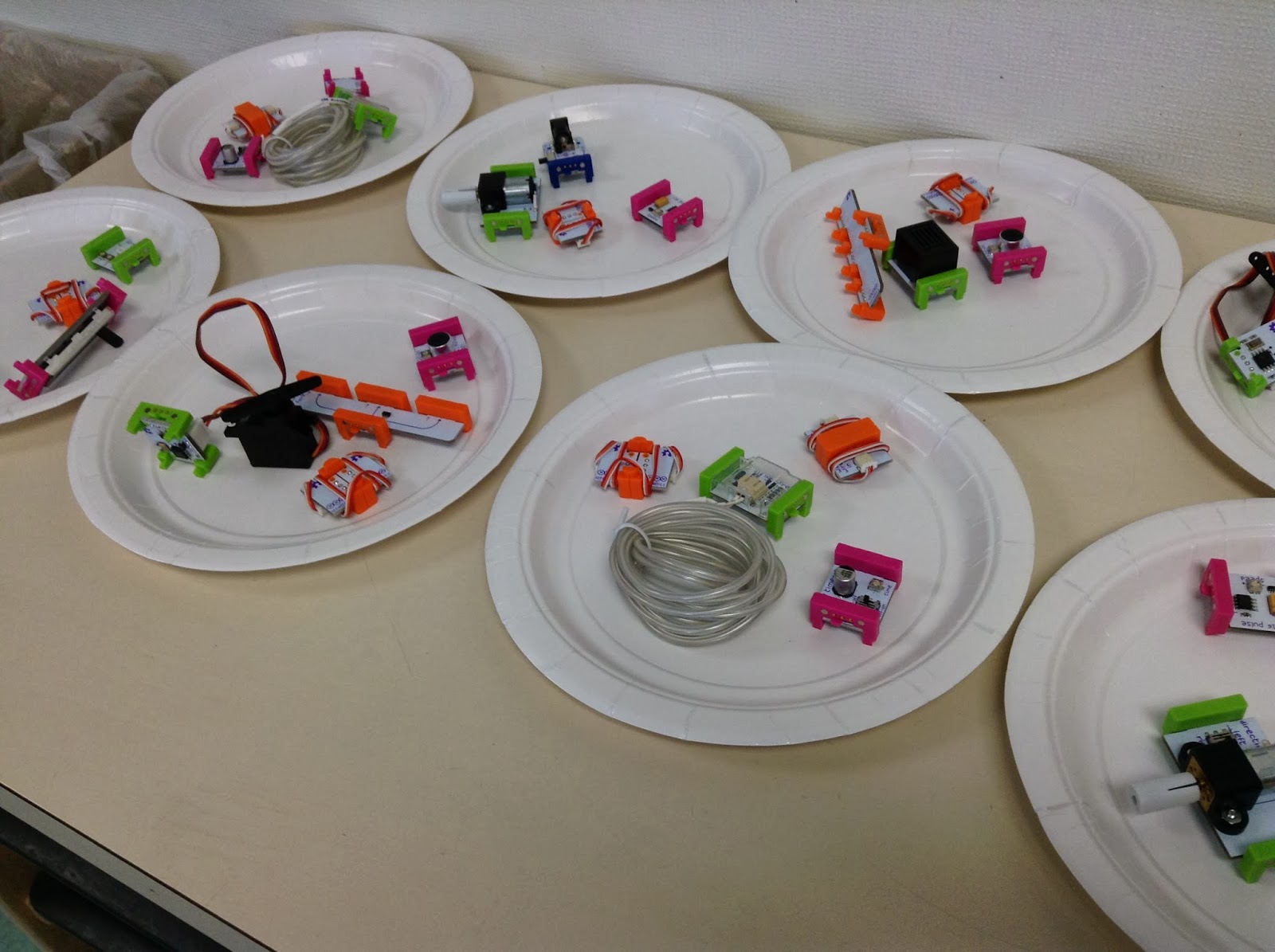 It wasn’t long before the students discovered that the pieces snapped together and most students figured out that there was a magnetic pull involved so they inferred the bits were magnetized. They also noticed that the bits were different colours and had words and numbers on them. 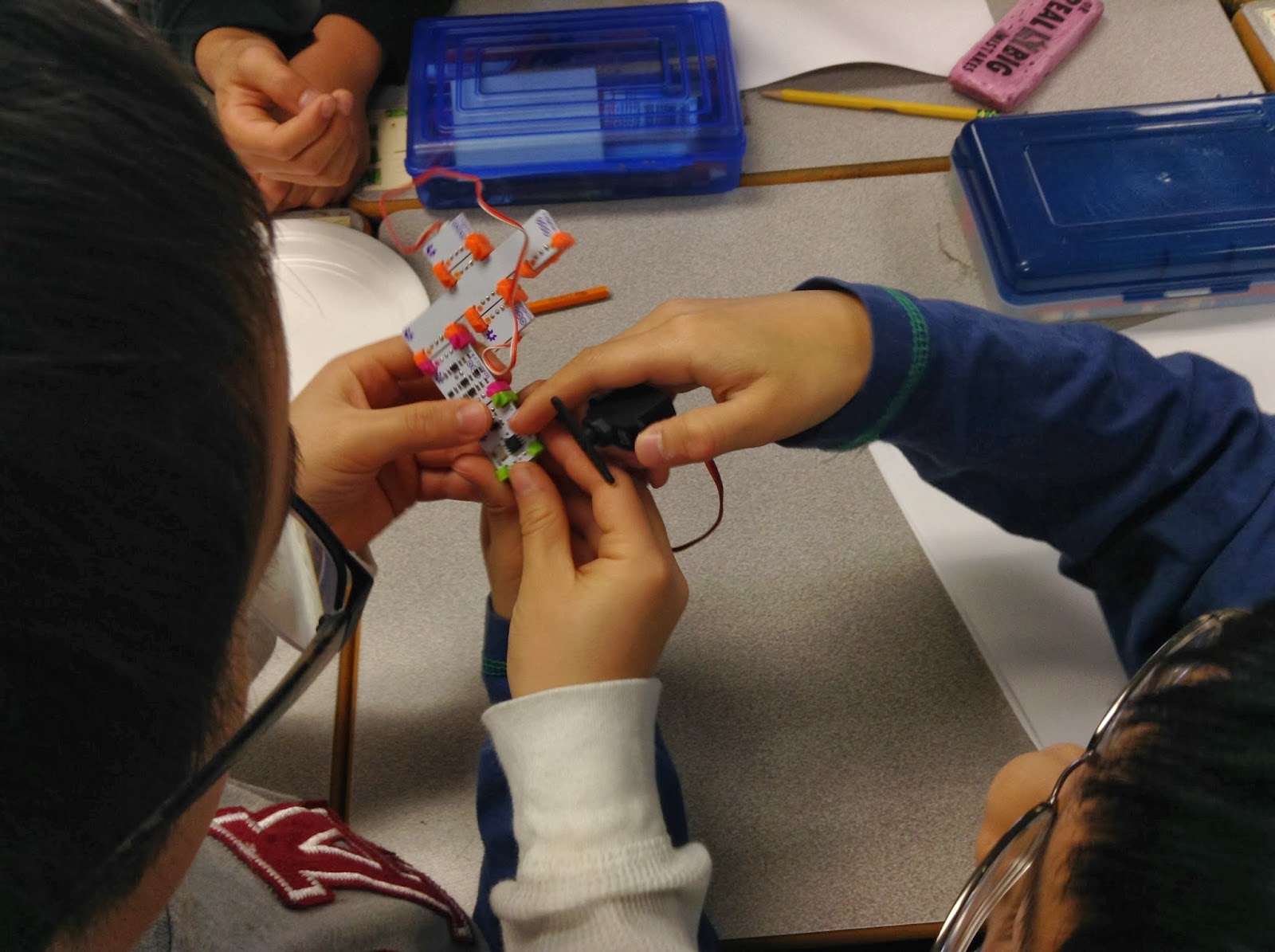 The students began connecting bits together but were a bit puzzled that they couldn’t get the bits to do what they wanted them to do, especially the ones labeled “buzzer” and “lights”.
One group of students then really looked closely at the power bit that they had and noticed there was an on and off switch but wondered where the power came from. One student asked if we needed to plug it in or get a battery. I went over to the kit and got the 9V battery and cable and then something magical happened in the classroom. Once the students realized that the power bit was truly powerful, they all swarmed around each group of students as they tested their circuits to see what would happen. 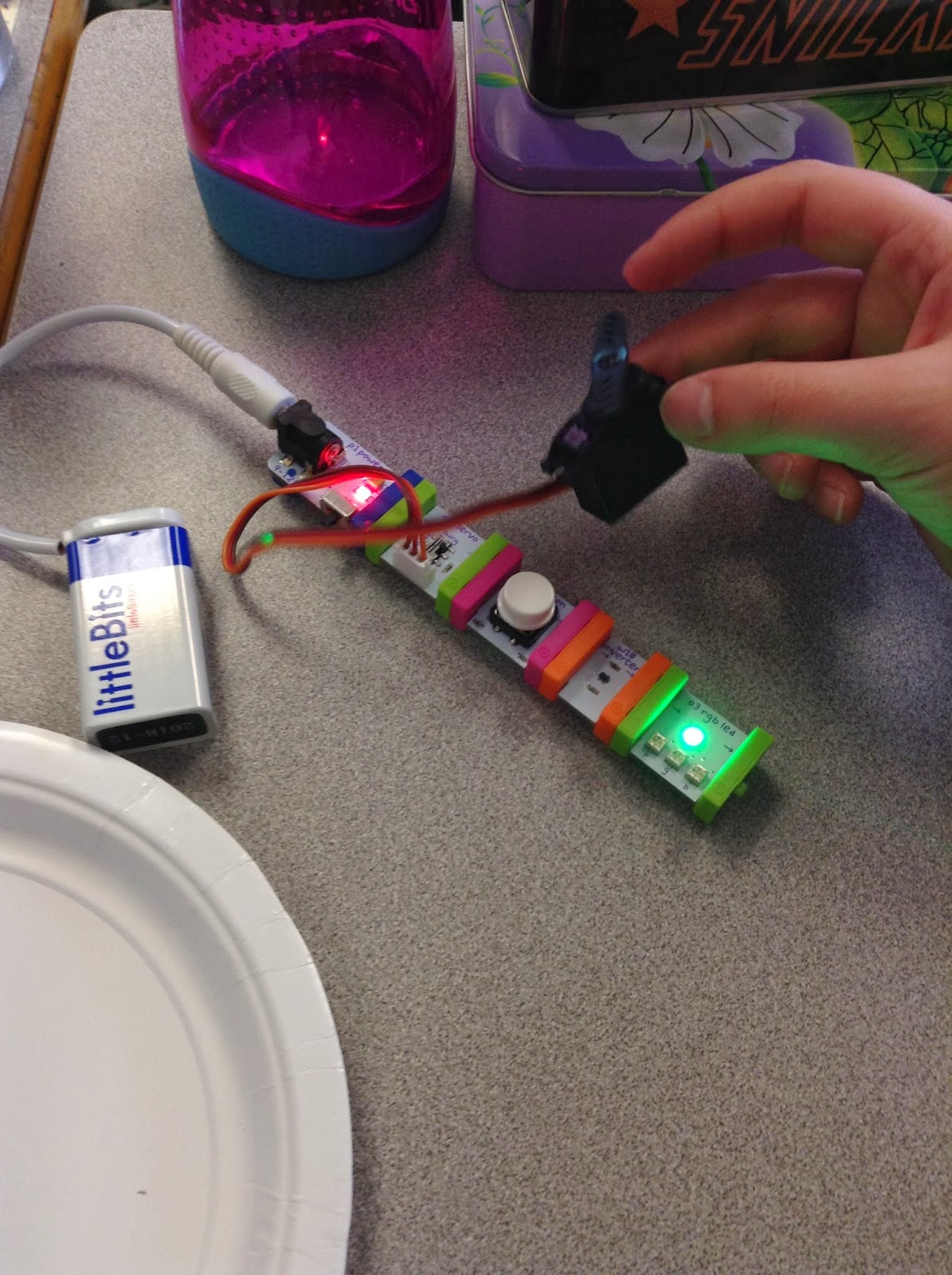 The students recorded what they noticed about their littlebits, what they wondered about and what they discovered. 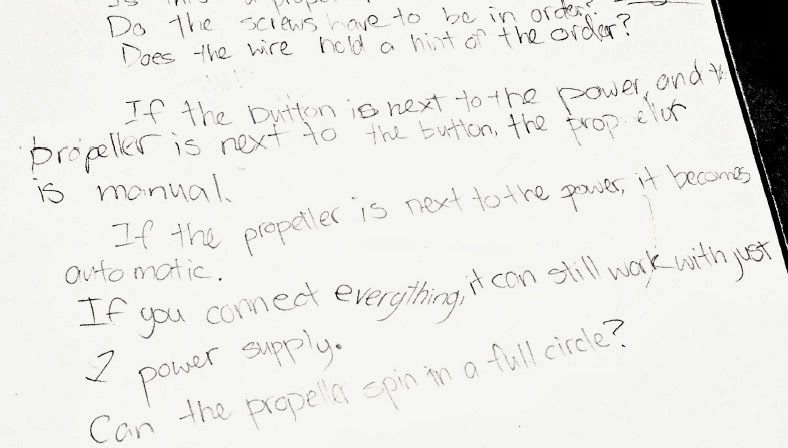 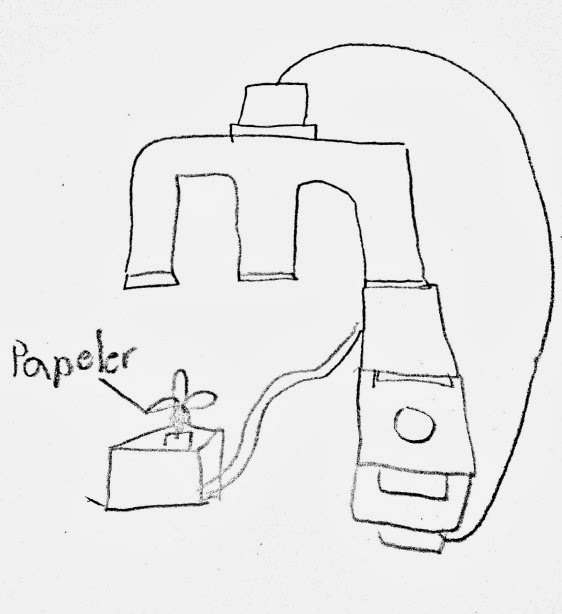 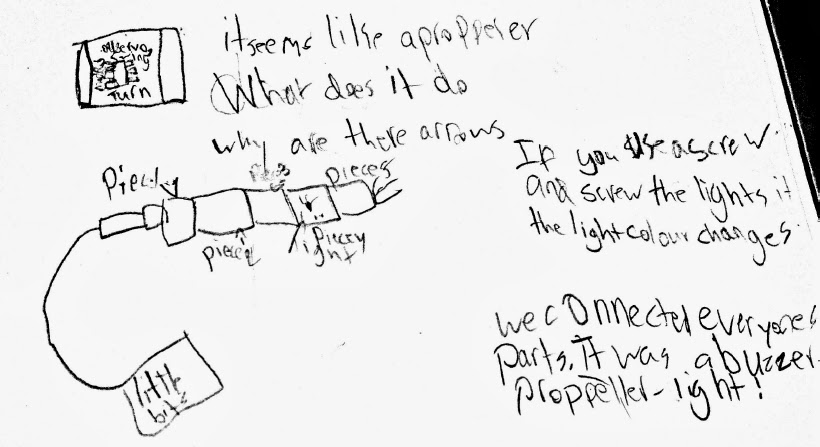 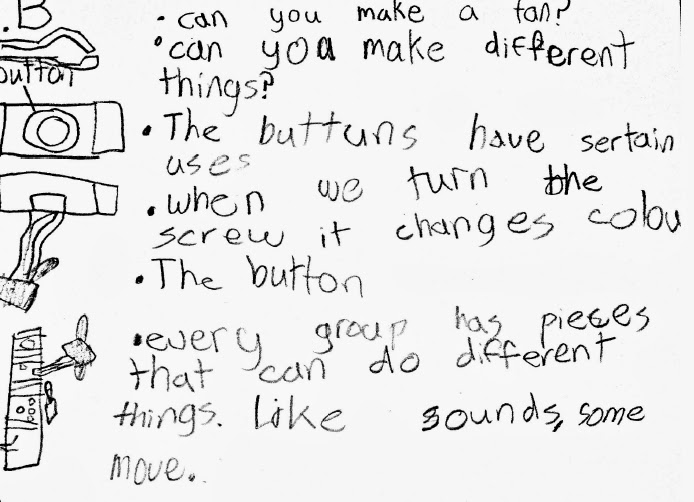 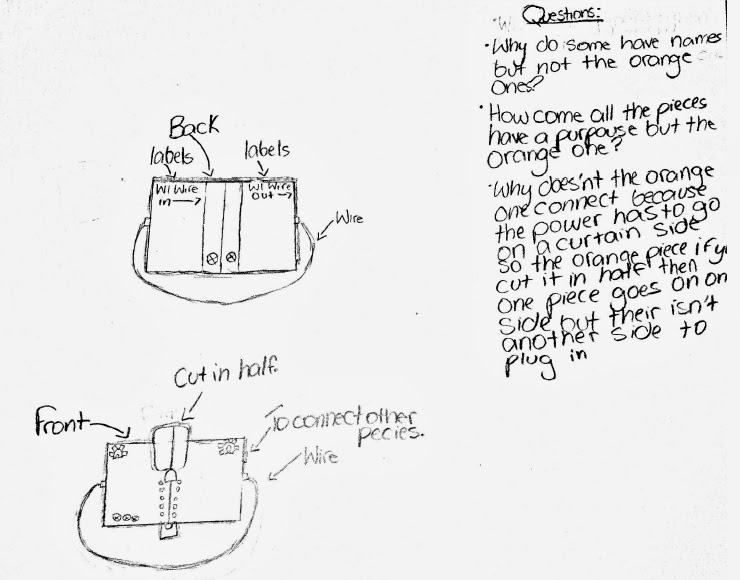 More information about littlebits and the short intro video we watched can be found HERE.

looking closely: what do we notice and wonder in the woods

The three grades 2 and 3 classes at McNeely have been learning all about plants. Near the end of November two of the classes took the school’s iPads on a little field trip to the wooded area near the school and the afternoon class had treasures from the wooded area into their class for the afternoon (it started raining at lunch and rain and iPads do not mix!). The students were asked to look closely at the plants and their different parts, noticing colour, shape, size, textures and details.  What students observed then inspired many questions. 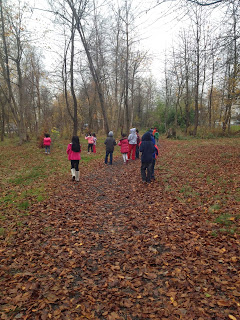 The students took photos of plants or parts of plants, using the iPad. Many students took pictures of both moss and mushrooms although they were not sure they were plants (but were more sure about the moss because it was green!). Great openings for future inquiries!
Two apps were introduced to the students.
They used Skitch to create labeled diagrams with the photos they took. 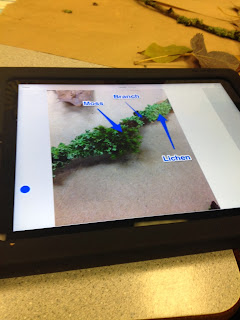 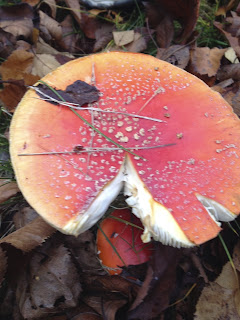 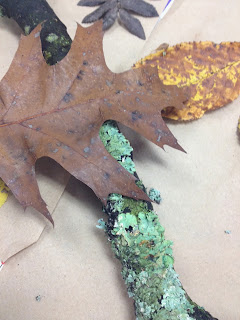 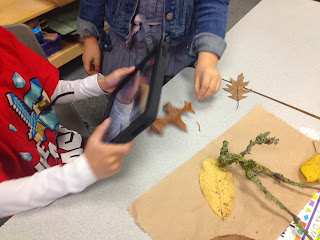 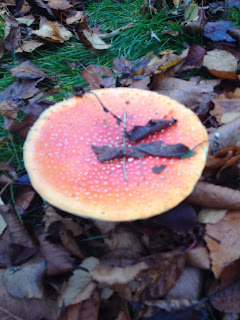 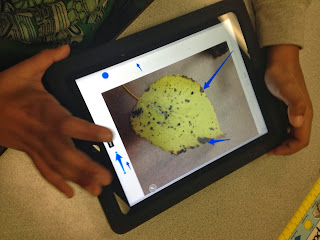 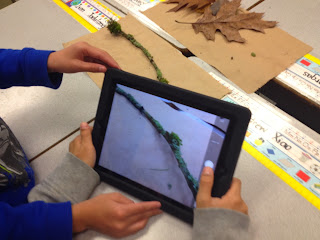 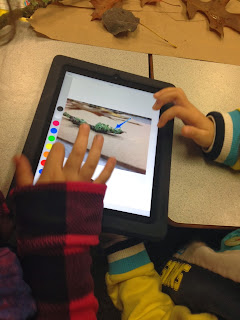 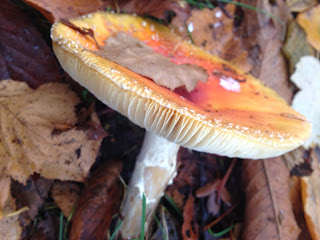 The students also used the ShowMe screencasting app to record what they noticed and wondered about their plants. 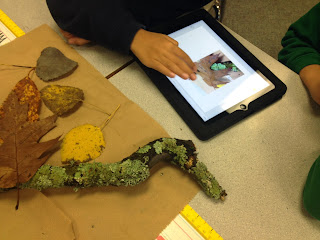 It was a great day working with natural materials and technology side by side.
~Janice