School District No. 38 (Richmond)
Our focus is on the learner
Integrating Technology for Teachers
A site dedicated to helping teachers integrate technology into their curriculum

I paid a visit to my friend Patrece’s grade 4/5 classroom and I introduced her students to the app ’30 Hands’. For those who don’t know about this app, it is an app in which students take photos and put them into a slide show and then do a voice over for each slide. The students can then export their creation as a movie. I call these creations ‘Audio Slideshows’ and are a quick and effective way for students to explain their understanding or what they know. 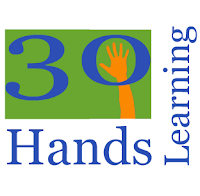 The lesson I led integrated ’30 Hands’ with Math. The students were to make an audio slide show of different arrays they could find in the classroom. This helped with their understanding of the concept of multiplication and reinforced their basic facts. We did a quick review of what an array was and then we took a look around their room for examples of different arrays that were already in their classroom. Students pointed out the tote trays, their display of art work on a bulletin board, and the calendar were all examples of arrays.

Then is was time to take photos. We talked briefly about taking good photos and pointed out that all of the parts of the array need to be in the photo. Conversely, students could take photos of only part of an array if the array was too big. Students opened the app we navigated to the slide screen, after which they were sent off to take five photos of different arrays in or near the classroom.

After taking their photos, we reconvened the students and looked at what information needed to be included in their audio recording for each photo: 1) name the array in two ways  2) give the multiplication sentence and related facts  3) provide the answer to each multiplication sentence. We also talked about speaking clearly and loud enough so their voices could be easily heard, and about the fact they might need to find a quiet place near the classroom to do their recording.

Students then went off to find a quiet place to record. Most students found they had to do two or more takes for each slide, but eventually they all recorded their narrations for each slide with the relevant information. Students then exported their audio slide show as a movie and we shared them with the class with the classroom projector. I find the students are more apt to complete a well crafted product if they know it will be shared with the rest of the class. Below are a couple of samples of the student movies.

Was it a useful lesson for the kids? Absolutely, as it not only solidified their understanding of arrays and multiplication, but also introduced them to a very useful app. I remember one student in particular who did not fully understand how arrays connected to the concept of multiplication, but while rehearsing the narrations for her photos, the light bulb went on and she had a big smile on her face. Was it the verbal rehearsing or the visual in front of her, or the combination of the two that helped her understand? I wish I had asked, but one thing I know is that when students utilize verbal and visual information, there is a greater likelihood they will better understand concepts.